Hino Team Sugawara No. 2 Car up to cumulative ranking number 12 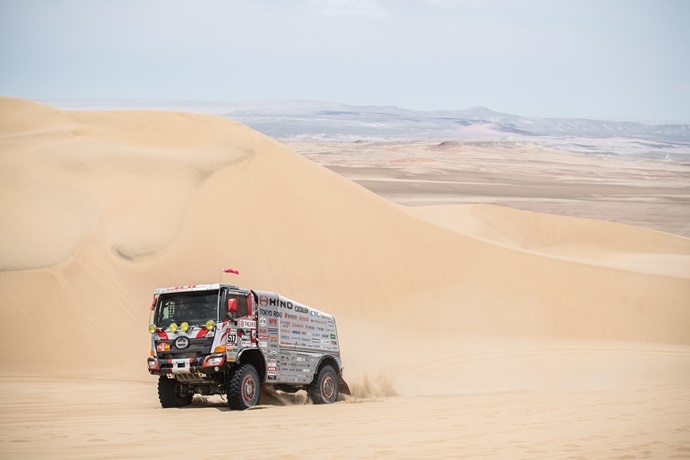 Stage 2 - Day 3 - No.1 Car suffered from power steering trouble and stopped on the course

The Dakar Rally 2019 event finally started for the truck section on Monday 7th January. An 84 km SS (competition section) was held between Lima and Pisco. Hino Team Sugawara moved Southeast at the liaison point (movement section) 247 km from Lima. Once entering Pisco for the bivouac, SS was conducted around the 84km bivouac. We were happy with the first day of driving and great to finally start the competition after so much testing and preparation.

The 2nd stage held on Tuesday was a 342 km SS (competition section) in the tough terrain desert around Pisco, after which it went Southward at Marcona for 203kms.

The SS distance is longer compared to the first stages, and we are certainly aware that full-scale competition has started.

Pisco's bivouac is located at the foot of the sand dune area, with the latest event and the SS also being conducted on sand. The road winds along a withered river with rocky places appearing along the way, making a tough course.

Driving through the huge dunes, the second car of Hino Team Sugawara "Teruhito Sugawara / Katsumi Hamura" was in the early stage of the race and the locking mechanism of the centre differential became partially stuck, but they continued carefully as it was. They went through in 16th position at the CP (checkpoint) and finished 19th for the day.

The soft sand dunes in the final stage also ran safely for No.1 Car and ranked 14th overall and finished 1st in the 10 litre class. Based on this result, the cumulative ranking is 15th overall, keeping the top position in class as well.

The team was happy with the pace and overall ranking but the No. 1 Car "Yoshimasa Sugawara/Sakurai Hitoshi" pair started running at a cautious pace. They unfortunately stopped on the course on the paved road after being hit by steering system problem. The team of mechanics joined the car and he helped to restore it partially to get it driving again.

No.1 Car arrived safely at the Marcona bivouac past 11 o'clock, but regrettably were forced to leave the race due to not passing the required checkpoint and goal.

Unfortunately the No.1 Car withdrew from the front line due to convention regulations. No.2 Car came up to the cumulative ranking in 12th. A 331km SS (competition section) in the desert area around the Marcona region, then completed in Arequipa with an overall 462km course.

SS had a sand dune with a huge difficulty level in the early stage, and then a sand dune with very soft sand, making it difficult to navigate the terrain. It was a tough day for the team with sand, stone pavement roads and some very harsh climbing making it tough, but with only the No.2 Car in operation "Teruhito Sugawara / Katsumi Hamura" had a great day! The car also performed the early sand dunes in a safe manner, and finished 10th overall.

From this day onwards, the start order of the truck division was the same time frame as the four-wheeled vehicle and the four wheels, with the trucks to run in conjunction.

As a result, the team stayed in 12th overall, which divided our big rivals Kamazu and Tatra. And most importantly, we are 1st place in the 10 Litre category.

From the 10th (Thursday) we will enter the only marathon stage of the competition, the bivouac in Tacna to the marathon bivouac, minus our mechanics. Inspection and repair has to be done only by the participants and in some cases will affect the 11th place. Before that, the Hino team's mechanics had carried out elaborate preventive maintenance.

Stay tuned to Hino Australia’s Facebook page for the next round of updates.

‘The car suddenly becomes ineffective, with the power steering early in the dunes, we tried the emergency measures but nothing worked.  Although retiring is very disappointing, I think that I want to switch feelings if it can not be helped.’

‘It is regrettable because I feel unhappy. This is the rigor of the Dakar Rally. While helping with the bivouac, I would like to gain experience for the next opportunity.’

'Stage 3 was a long day. The first half of the sand dunes were difficult, I felt like a climb up using all the power we had. A stage of endurance where the stones are many and the pace does not rise. The car is in good condition. Because I enter the marathon stage I will do my best to run fast without breaking.’

‘I am sorry for the retirement of No. 1 Car. I retired myself last year, but I learned that the one who was left with the result was amazingly pressured. Stage 3 was hard to run while finding a place to run on a technical course.’ 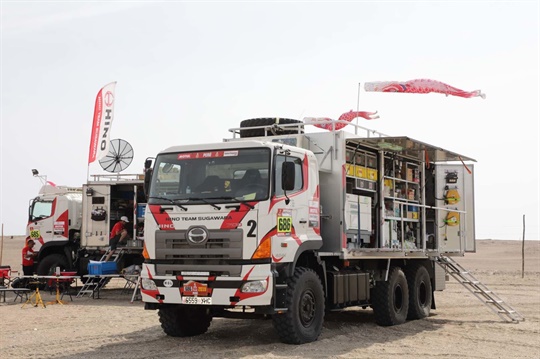 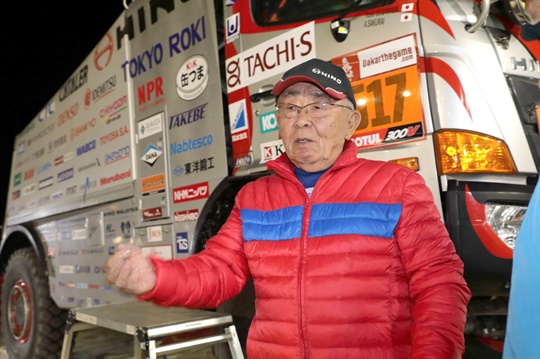 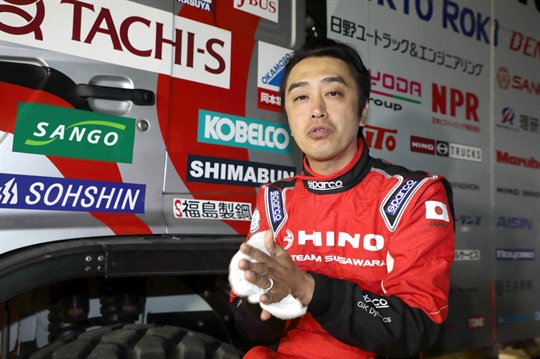 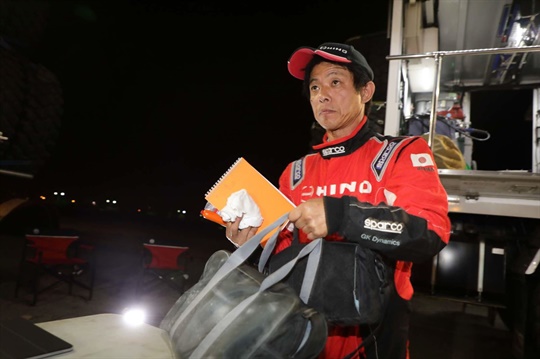 Stage 3 - Day 4 - Arriving in Arequipa, Hama village navigation for the preparation of road books at once